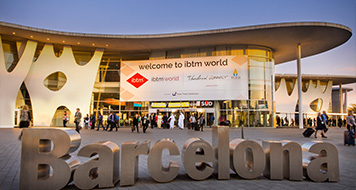 The 30th anniversary edition of IBTM World 2017, which took place at Fira Gran Via, Barcelona, from 28-30 November 2017, closed yesterday (30 November) with over 74,000 appointments (up 23% compared with 2016) having taken place during the three-day event, setting a new record for the show.

Some 3,000 exhibiting companies from over 150 countries were joined by 3,463 buyers and thousands of visitors for a packed schedule of meetings, networking and high quality educational sessions.

Exhibitors hailed IBTM World 2017 a great success: “IBTM this year has been really good for us. We’ve had an amazing number of appointments - close to 1,000 have taken place over the three days. In addition, we’ve had more than nine group presentations with approximately 100 Hosted Buyers and we hosted a client event last night in an off-site venue in Barcelona with more than 100 Hosted Buyers in attendance, so the engagement that we’ve experienced this week has really been tremendous”, said Steen Jakobsen, Director, Dubai Business Events & City Operations.

Shyla Gardiner, from Hyatt Mexico, said: “This is my fourth year at the show and 60% of my appointments have requested proposals already. This is the first time that, in addition to groups, I have closed proposals with travel managers. In short there is more business.”

Hosted Buyers were equally positive, Srdan Elakovic from Aurora Maris Travel, commented: “The show is going very well; the contacts are good and high quality. Excellent”. Ricardo Gomes, Dynamize Experiences & Events, said: “It is my first time as a Hosted Buyer, but I have been coming to the show since it was in Geneva. The show is different this year and has been re-imagined well.”

Commenting at the close of IBTM World 2017, IBTM’s Portfolio Director, Kerry Prince, said: “In the twelve months preceding this year’s event, we spent a huge amount of time analysing and sourcing data and speaking to our customers to truly understand how we can best service their needs. On the back of this we made several changes and innovations, including introducing an enhanced Hosted Buyer programme, adding two renowned keynote speakers to the education programme and introducing the Start-Up Pavilion for new and emerging tech companies.

Kerry continued: “It has been fantastic to see first-hand the positive impact of the changes we’ve made. Ahead of the event we broke our record for the number of appointments made and not only have we received very positive feedback on the quality of those meetings – and seen deals done on the show floor - but also, we’ve been able to manage and reduce the number of ‘no-show’ appointments – all of which makes a real difference to our attendees.

“Of course, we’re always looking to the future and we’re committed to remaining on the cutting edge of the industry. There will be more innovations to come next year, including the introduction of a third keynote speaker session, following the success of this year’s programme. We’re already looking forward to coming back to Barcelona for IBTM World 2018.”

This year, as well as welcoming back many long-standing exhibitors, several new exhibitors attended IBTM World for the first time, including Iran Doostan Tours; CIC Alger, which opened in 2016 in Algiers; Travelful, which allows delegates to book flights directly from the event’s website, allowing organisers to retain traffic and Zantours, the largest destination management company for Zanzibar.

Sciensio was judged the overall winner of the IBTM World Tech Watch Award, for its Concierge Eventbot, which also won the Audience Engagement category. Concierge EventBot is a chatbot that has been specifically developed for events, enabling event organisers to easily share information and logistics with their attendees in a valuable and accessible way.

At the Meetings Leadership Summit, which took place on the eve of the show opening, Dr Rob Davidson was awarded the IBTM Lifetime Achievement Award. Rob was presented with the award in recognition of his dedication to educating and inspiring young people entering the meetings and events industry.

Attendees also had the opportunity to discover and interact with exciting new and emerging technologies and services in IBTM’s market-leading Innovation Zone, Technology and Services Zone and the Start Up Pavilion.