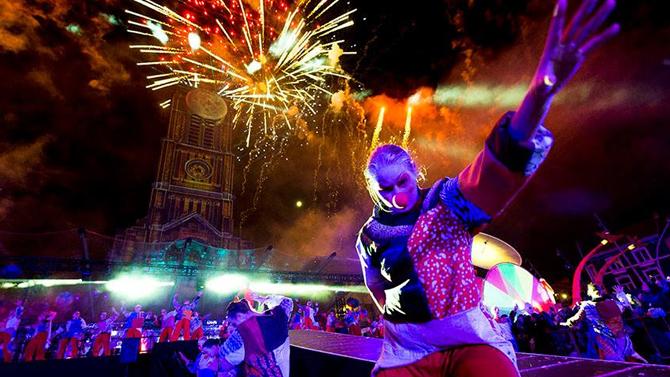 After winning three awards at the EuBea 2016 (European Best Event Awards) and BEA 2016 (Belgian Event Awards), Luc Petit Creation, the non-profit organization 'Décrocher la Lune' and the City of La Louvière are delighted to announced that their 'Decrocher La Lune VI' project won an award at the Thea (Themed Entertainment Association) in California in the category 'Live Event Spectacular on a Limited Budget'.

'Décrocher la Lune', the only belgian project in competition and to be awarded a prize among the big-budget international giants of the events world, placed a winning wager on the human aspect. Out of the 200 candidates among which Universal Studio, Disney, Puy du Fou and the Van Gogh exhibition, 'Décrocher la Lune' was above all rewarded for its creativity: the one of a town, but also of a director and his team. La Louvière is delighted to have invested in local talent and to have turned it into its calling card.

Franco Dragone returns to his home town La Louvière in 2000, to set up his own company. Looking for a big event to celebrate the turn of the century, the town contacted him who appointed Luc Petit to direct the first 'Décrocher la Lune'.

Sixteen years later, it's the sixth edition of the urban opera that has recently been honoured on the international stage after casting a shining light at Mons 2015, European Capital of Culture.

The Themed Entertainment Association (TEA) is the international association representing the world’s leading creators, developers, designers and producers of compelling places and experiences - worldwide. TEA members are innovators and problem solvers whose careers are spent confronting and overcoming unique challenges. They are specialists in realizing one-of-a-kind projects that have never been built before, and opening new frontiers of technical integration, creative storytelling, visitor engagement and brand extension.