NEWS DALL'ESTERO (Spagna) - Absolut Icon: when a bottle is the star piece of the event

New York 80´s, Andy Warhol, urban artists and Absolut. A creative palette that shaped an iconic bottle has become a piece of art. 30 years after, the bottle is redesigned and presented as Warhol himself would have done: surrounded by urban artists and creativity in Palacio de las Alhajas, transformed for one night in an art gallery. 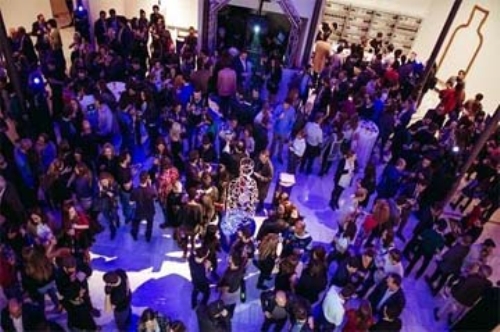 The brand released the project Icon Absolut in which  10 of the most representative artists of the Spanish creative scene reinterpreted in each of their disciplines the new bottle design.
The result are ten pieces of art, ranging from paintings, sculptures, street art or photography in which the focus is on the symbol 'A' (characteristic feature of the new restyling of the bottle).
The event, organized by the agency Pelonio, revolved around these ten pieces that were shown as if in a gallery exhibit. It was also organized a silent auction on these pieces and the attendees targeted their bids on small desks that accompanied each work.
The music was also present with the DJs collective Valley Electric with their mixer well lit by leds shaped like the Absolut bottle silhouette. References to the new bottle and especially the symbol 'A' were present everywhere, from the glass jars where the cocktails were served to the lighting.
A  balloon with an 'A' illuminated the main facade of the palace at the entrance of the guests, and once inside, the most photographed and tweeted image of the evening was a huge 'A' projected onto the glass dome of the space.