On 9th February, a multi-coloured image of the Eiffel Tower with the words ‘Paris, Candidate city, Olympic Games 2024' was screened onto the Arc at the top of the Champs-Elysees, and simultaneously on the town hall in Marseille. 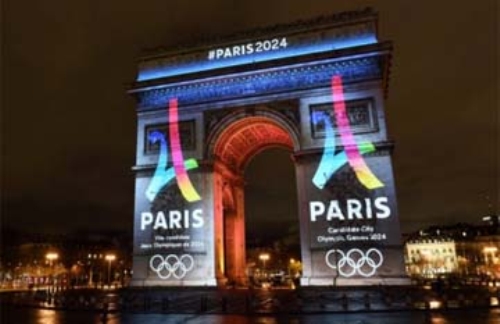 The logo’s unveiling marked the start of the French capital’s campaign to lure the Olympic Games to Paris, which faces competition from Budapest, Los Angeles and Rome, with a decision to be made on September 13th, 2017 in Lima. Paris, which lost out to London for the 2012 Olympics, has staged the sporting spectacular twice before: in 1900 and 1924.
The 2024 bid committee is co-chaired by former French rugby supremo Bernard Lapasset and triple Olympic canoeing champion Tony Estanguet, who were joined at the unveiling by the city’s mayor, Anne Hidalgo.
French sports ministers Patrick Kanner and Thierry Braillard were also in attendance.
The agency Double 2, in charge of the organization of the event, took care also of the  'social' aspect of this project with 'Tweet to reveal', which allowed the engagement of the public in a funny way: people were invited to support the operation on Twitter, including the official hashtag #Paris2024 in their messages.
The tweets then appeared in succession on the Arc de Triomphe, then turned into pixel.
PER LEGGERE LE ALTRE NEWS DALL'ESTERO, CLICCA QUI