One of the most epic moments of the national meeting of Toyota Business Plus, organized by Eventisimo on June 9th in the logistics center of Toyota in Toledo, was when two models of the best-selling pickup in history crossed the stage literally destroying the walls left and right of the screen. 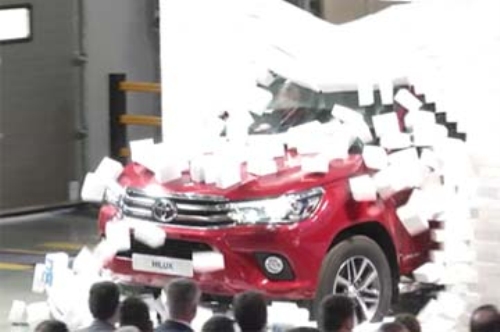 Toledo, logistics center of Toyota: the reason for choosing this particular location was given by thepresentation of the full range of commercial vehicles in Spain.
The industrial plant environment served as inspiration for an event of this kind, but it was also a challenge for the agency, since it took a major effort of coordination with the staff of theToyota Parts Center Spain, so that the space would not be affected by the assembly and disassembly process.

The surprise moment was undoubtedly the impact of the two pickups against the walls on either side of the stage, which wanted to reflect the message given by the brand “the unstoppable power of Toyota Hilux” value. Accompanied with light and sound effects, the moment left everyone speechless.

After the reveal, there were speeches and the new models of Toyota Prace, the other commercial vehicle full range debuting in Spain, were also presented. Finalizing the event, the participants had the chance to check the vehicles and enjoy a cocktail in an outdoor tent where the new Toyota industrial range was showcased.