The successful cooperation between Jeep and Red Bull continues, also with the support of Vok Dams, which was present at the event that took place on 8-9th January at Olimpiapark in Munich. 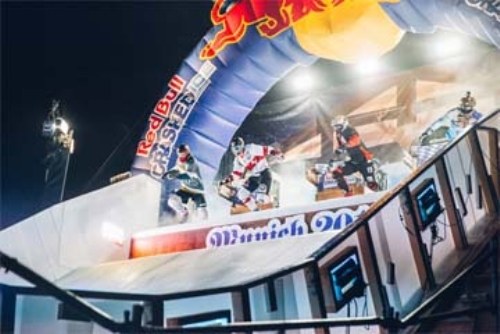 The second stop of the world’s fastest sport on skates, the Red Bull Ice Cross Downhill World Championship, was in Munich, on 8-9th January: the event returned to Germany for the first time since 2011 and it was held at Olimpiapark.
More than 35,000 people gathered at the location to enjoy this action-packed competition, where athletes hit speeds of more than 30 mph while hurtling down ice tracks filled with drops, hairpin turns and gaps.
The event saw also the participation of Jeep, official mobility partner of Red Bull Events in Germany.
For an optimal positioning, exciting accompanying actions and professional car handling, the company trusted once again the events and automobile expertise of the team of the Frankfurt-based agency Vok Dams.
PER LEGGERE LE ALTRE NEWS DALL'ESTERO, CLICCA QUI