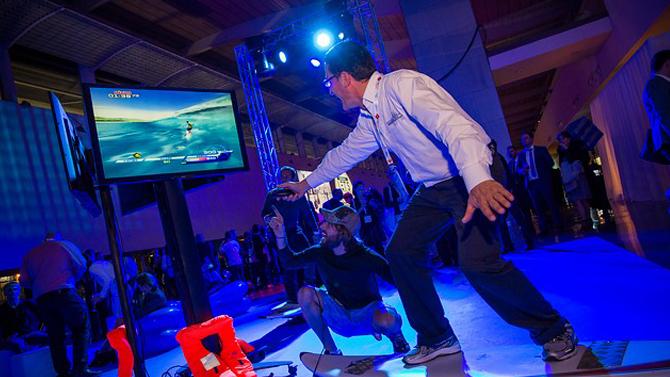 Technology takes off at ibtm world 2016

Using ibtm world as the platform to make industry announcements, many exhibitors have showcased themselves by using the very latest technology.

Meetings industry technology went mainstream at ibtm world 2016 in Barcelona last week. Many of the 3000 international exhibitors chose to showcase themselves by using the very latest virtual reality technology, videography, giant Led walls and illuminated flooring, just some of the inspiring innovations that brought ibtm world to life.

Thailand 360 used virtual reality to transport buyers and trade visitors on a journey through their culture and hospitality, Marriott took attendees on a virtual reality tour of their brands, Korea gave VR ski jumping sessions to celebrate the PyeongChang 2018 Winter Olympic Games, while Cvent Express created the very first live challenge for buyers and visitors to pitch themselves against each other in the quickest to set up an event website, launch the event, register and print their badge.

Graeme Barnett, Exhibition Director ibtm world, applauded the creativity of exhibitors this year; “The inspiration of exhibitors has been unbelievable, and the visual impact of so many live, hands on experiences and attractions have drawn the crowds to their stands. Europalco, Cvent, Hard Rock Cafe, Paris Convention Bureau and Norway Convention Bureau all won stand awards for their dynamic ideas and designs. We want to enable planners to deliver more inspirational meetings and this year we added our own creative spin with ACS designing the Knowledge Village as a big top circus where performances by all of the speakers took place in themed environments”.

“I like the format of the Lion’s Den. I like the fact that you are siting around the speaker, it’s more casual and its not like a classroom!”, said Hosted Buyer Hans Schenk, Society for Worldwide Medical Exchange Usa.

Using ibtm world as the platform to make industry announcements, many exhibitors chose the event to launch their news. AccorHotels celebrated their new Pullman in Sarawak, and the launch of a new brand Jo&Joe; Novotel Suites shouted out its debut in Vietnam, and Hyatt Regency Tashkent announced it’s opening in Uzbekistan. Other exhibitors focused on sustainability and CSR issues with Flanders Meeting & Convention Center launching A Room with a Zoo, the only convention centre in the world set in a zoo.

Following the roll out of the matchmaking technology at ibtm world 2015, this year for the first time, ibtm world created a Hosted Buyer recommendation system where technology gave other suggestions of exhibitors to meet with based on the business objectives expressed by Hosted Buyers. More than 200,000 recommendations were made with some exhibitors being selected 2,000 times and an average of 82 additional selections per exhibitor.

Pennie Solbeck, owner and creative director of Choko Choko Yeah was overwhelmed by their first time experience; “It’s been great, we have tried other events but the appointment system here has delivered.  We have already sent quotes out and we had over 100 leads in a day. The Hosted Buyers here are much more focused, well informed and serious about business”.

Giovanni Bastianelli, Executive Director of ENIT also commented on the level of quality buyers; “We have decided to return to ibtm world as it is a key platform to target the MICE industry and luxury MICE sectors. The level of the buyer’s meetings has been excellent and we feel positive about future business resulting.”

In 2017 ibtm world will celebrate its 30th anniversary. The event will take place from 28 – 30 November in Barcelona.