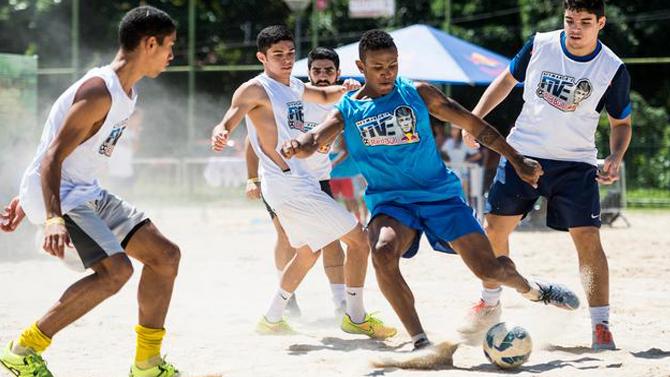 More than 65,000 players from 47 countries signed up to play in the first year of Neymar Jr's Five and 2017 promises to be even bigger. Neymar Jr’s Five is the Brazilian forward’s signature football tournament – and a truly global phenomenon.

Neymar Jr launched the second edition of his signature five-a-side tournament and spoke about his own hopes and dreams – including a future playing in the United States.

Neymar Jr’s Five made an instant impact in its debut year in 2016, with more than 10,000 teams and 65,000 players in 47 countries vying for overall victory in the world’s biggest five-a-side football tournament. This time it will be bigger than ever, with regional qualifiers in 53 countries and a rule change giving more players the chance to compete.

The 2017 tournament is again open to teams of five to seven players aged 16 to 25, but for the first time two over-aged players are allowed as part of each squad. Tens of thousands of players will set out with the hope of making it all the way from regional qualifiers to their national final and on to the World Final at the Instituto Projeto Neymar Jr in Praia Grande, Brazil.

Neymar Jr himself is dreaming too – of more success with FC Barcelona and Brazil in 2017, and a long-term future in the country that excites him most.

Neymar Jr’s Five provides a unique challenge to players the world over, as every time one team scores, the opposition loses a player. It’s inspired by the street football Neymar Jr himself grew up playing and the Barcelona and Brazil forward cannot wait to see a new season of this remarkable tournament kick off.

- Altogether, more than 65,000 players were registered