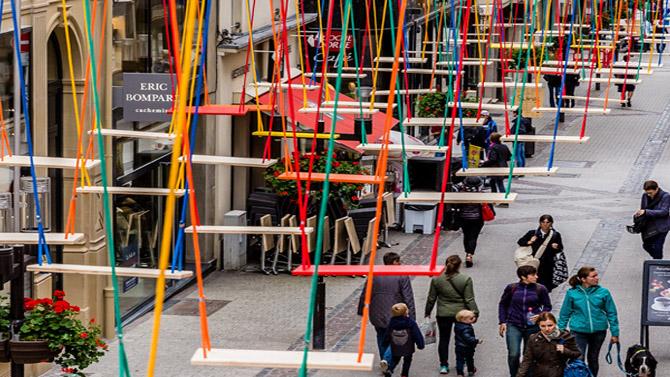 Luxembourg artist Max Mertens has installed hundreds of swings above a shopping street to offer pedestrians a new experience of a familiar place.

Mertens hung the 450 handmade wooden swings 'in the sky' above the Rue Philippe II in the city centre of Luxembourg.

The Swings installation, which is suspended just out of reach of pedestrians, aims to evoke nostalgia over long summer days and make passersby recall their childhoods. The swing ropes are painted in bright colours to attract the attention of people walking below.

"Re-appropriated, multiplied and transposed in an unexpected context – suspended over a downtown pedestrian street – the swing becomes a playful work of art," said Mertens.

Mertens has previously created several other installations, including a pneumatic indoor wave machine and an urban game involving a giant red balloon. Swings hangs above the Rue Philippe II and the Avenue de la Porte-Neuve in Luxembourg's city centre and will be in place until August 2016.

The installation was created as part of a competition organised by the Association Rue Philippe II in collaboration with the Casino Luxembourg art museum and the City of Luxembourg. Out of five projects, Swings was selected for display by the organisations.

Other installations to have altered spaces with swings include Philippe Malouin's interactive quartz swings in a Neoclassical palazzo in Milan and a glow-in-the-dark set by Höwler + Yoon Architecture, created to brighten up a Boston park and its playground.