Pubblichiamo le notizie dall'estero che, ogni quindici giorni, vanno a formare la newsletter internazionale sul sito besteventawards.com. Una panoramica sul mercato europeo degli eventi che può servire ai nostri lettori come spunto per allargare gli orizzonti della creatività.
'The Adventure of Innovation' is the name of the video mapping show by General de Producciones y Diseño, SA (GPD), that projected scenes from the history and culture of the city of Seville and promoted talent and innovation as the doors to a future which is constantly evolving and that makes life easier for people.
This show is part of the concept of 'Cultural Engineering' developed by GPD, products designed to make an approach to history and traditions, which includes the award-winning show created for the 8th centenary of the Cathedral of Santiago de Compostela realised in 2011. 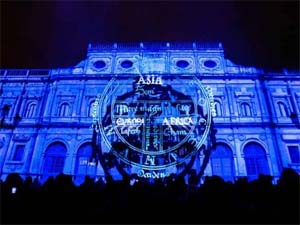 The show ran fields as astronomy, cartography, transoceanic navigation, botany and medicine, always treated like an adventure to appeal to all audiences. Obviously, one of the greatest challenges of this type of action, in addition to the script and creativity, was the technical aspect.
To achieve the feeling of 3D, it was required the use of 10 projectors of 22,000 lumens each, and the work of more than 40 people. 20,000 frames were generated at a resolution of 4 K, and it was necessary to conduct a photometric study of City Hall to the millimeter so that all images recreated would coincide perfectly. 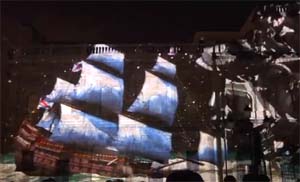 The event lasted 26 consecutive days and it gathered more than 700,000 people. The impact on the web was also impressive: 766,000 impressions in his hastag, almost 54,000 fans on Facebook and more than 50,000 people who watched the video from more than 100 countries.
(eventoplus.com)
Per leggere tutte le notizie estere dal mondo degli eventi vai su Besteventawards.com