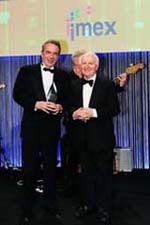 The award is made to personalities from the conference industry, and Mutschlechner was singled out especially for the role he played in the strategic positioning of the VCB as one of the leading global convention bureaus, as well as his services to the Viennese congress industry, which is a major pillar of the Austrian economy.
In 2013 the ICCA ranking put the congress city of Vienna in first place worldwide for the eighth time in succession - with 195 international conferences in 2012 ahead of Paris (181) and Berlin (172).
Imex, a worldwide exhibition for incentive travel, meetings and event tourism, takes place every year in May in Frankfurt and in October as Imex America in Las Vegas.
(vienna.convention.at)
Leggi le altre news dall'estero su www.besteventawards.com