Pubblichiamo le notizie dall'estero che, ogni quindici giorni, vanno a formare la newsletter internazionale sul sito besteventawards.com. Una panoramica sul mercato europeo degli eventi che può servire ai nostri lettori come spunto per allargare gli orizzonti della creatività.
In their second edition, 'Les Journées Particulières' LVMH saw the big picture. The doors of 42 exceptional places - in 2011 they were only 25 - have been opened.
Whether they were workshops where artisans work as Chaumet, Place Vendome, or at Louis Vuitton in Asnieres, or historical shops like those of Acqua Di Parma in Milan or Rome Bulgari, the full know-how of the group unveiled their history and secrets. 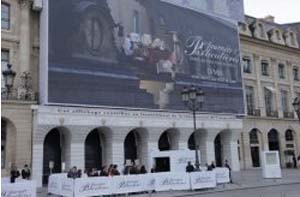 The event was organized by Havas Event, and this major operation took nearly six months of work and the agency had to manage many different tasks: meetings with the participating houses, logistics, permissions were only a few of them.
Highly publicized with a campaign in the press and display since mid-April, the event was also on the web with an online site, where people could register and do a bit of social networking. Moreover, in order to improve the service and hospitality of the space, they created a mobile app with geolocation.
Leggi le altre news dall'estero su www.besteventawards.com