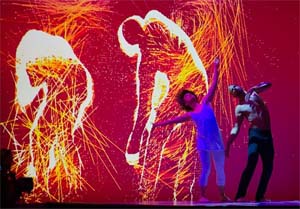 In total, seven outstanding inventions, which had been awarded the European Inventor Award, are presented in 3D.
Topics range from new inventions, to ferroconcrete and up to eye laser therapy.
The concept of the exhibition is based on the idea that inventions are valuable and thus need to be protected. As the exhibition is to tour several different science and technology museums in Europe, containers were chosen to literally function as protective covers and also as display areas.
The respective inventions are presented inside each container and their relevance to society and to business is explained. The result is quite impressive: already when the prototype was exhibited at the 'Science Collaboration Week' of the European Parliament in Brussels at the beginning of March, it received most positive visitor feedback.
Complemented by another six exhibits, the Hall of Fame will be shown at the Deutsches Museum in Munich from October on, after which it will tour seven European cities for 3-6 months each.
Leggi le altre news dall'estero su www.besteventawards.com